it’s 3 years since I wrote the first IoT program (“Hello, World!” in IoT reads “blinking LED”) and all the devices are still up and running.

I missed the 2 years update, I could blame COVID-19 for it, that would not be true, never mind.

In the meantime, besides the trivial (and the most useful) on/off control of light switches and plugs in various factory formats, the focus was on remote heating system control – thermostat. 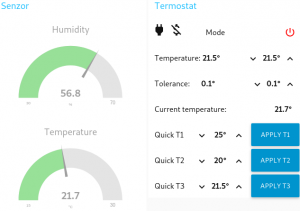 I used this winter’s long nights were used to solved this architectural issue and the (first) result it’s an all-in-one thermostat controller that has the temperature/humidity sensor and the relay control in the same box.

It’s was not a smooth ride and I still have the GPIO0/relay flicker at power-on (known issue on ESP8266, I could bet that in one of the last week long evenings it was working properly), but as Voltaire, the French writer, said, “The best is the enemy of the good.”

This is how very first one is looking, hopefully the software is a lot better than the hardware/layout (I really need to find a proper case). 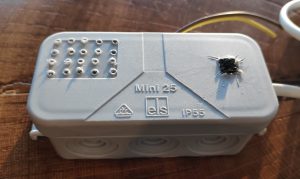